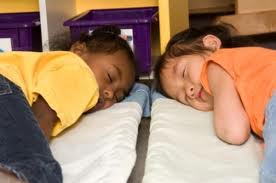 A new study reports what parents of preschoolers already knew:  naps make you smarter.  UMass-Amherst researcher Rebecca Spencer studied 40 preschoolers and found that naps help kids remember what they learned earlier.  In the study, children completed a visual-spatial memory game in the morning, and then tried to recall item locations on the memory test that afternoon and the next day.  Kids who took naps had 10 percent better recall, an effect that lingered even after a good night’s sleep.

It so happens that our own preschooler is living documentation of the UMass study’s findings. Nina, who turned 4 in August, is just at that point where she can power through a day without a nap.  And everything seems fine – for a while.  As long as our ball of joy is engaged in something creative or physical, you might never know she’d skipped her midday siesta.  But as the hour clicks closer to 5 – or when, as in the study, she gets needs to complete a task demanding greater attention or recall comes along – our perfect angel is replaced by a cranky, distracted little monster.

While sleep disturbances are a way of life for many parents of young kids, they exert considerable stress to parents and family life.  Napping — and sleep hygiene in general —  actually has some pretty important policy implications, especially because sleep disturbances are more likely to occur in low-income and non-white populations.  In one study, for example, parents in a predominantly low-income community kept sleep logs for their 4 and 5 year olds.  The researchers found that disrupted sleep patterns – such as variability in the amount of sleep and lateness of bedtime – were associated with adjustment problems in preschool.  Another study found a strong cultural element to sleep:  African-American children slept later due to later bedtimes, while children in lower income families had significantly more impaired sleep behavior scores than more affluent children.  Several other studies have also found links between race, socioeconomic status, sleep, and cognitive functioning, such as this one, this one and this one.

Child care and family support programs aimed at preschoolers would do well to emphasize the importance of sleep hygiene, and to help families and providers promote good sleep and bring out the best in our kids.  Because every parent occasionally needs a break from their beloved little monster.