Investor Returns in a Pay-For-Success Preschool Program in Colorado 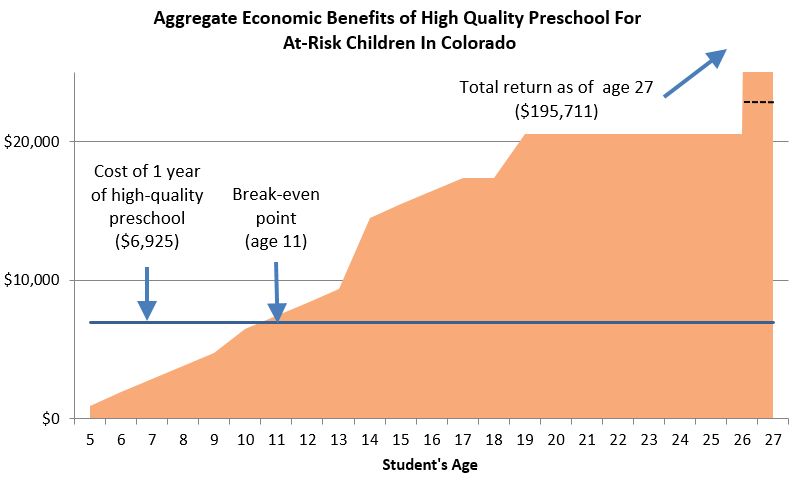 There is increased buzz around the country for Pay For Success financing programs for early childhood initiatives.  Sometimes referred to as Social Impact Bonds, these programs allow investors to underwrite the costs of social programs and then reap financial benefits as societal costs savings are realized down the road.

A number of interesting programs are currently underway or in the development stages.  The first PFS model put in practice in the U.S. concerns recidivism in New York State.  Underwritten by the Bloomberg Foundation, the investors are represented by Goldman Sachs, which stands to gain up to $2.1 millionif the program is successful.  Another PFS, a preschool initative in Utah, also combines private funding (again from Goldman Sachs) with foundation underwriting (this time from the J.B. Pritzker foundation).

PFS for early childhood programs have been slower to catch on, but there is increased momentum now.  There are two main challenges to implementating PFS programs in early childhood.  First, logistical and political hurdles must be navigated.  These include drawing up contracts between investor groups and school districts, which must commit to repaying investments if certain targets are met.  Another challenge involves making the case that in an underfunded landscape, additional investment is not a “zero-sum” game, but benefits all parties.   An understandable fear is that a PFS program would take money from away improving quality ECE for low-income children and redistribute it to wealthy investors.  When instantiated correctly, however, PFS programs create new incentives for investors, providing a net increase in funding and an implicit incentive to improve quality – all of which benefits providers and kids.

Colorado is one of the states where buzz about PFS preschool models is increasing.  From a strictly numerical perspective, the feasibility of a PFS in Colorado from an investors’ perspective is encouraging.  In work I conducted with APA Consulting last year, I estimated that a PFS model to provide high-quality preschool to low-income children would recoup its costs within seven years – by the time the children reach sixth grade.  This figure captures all of the societal economic benefits associated with these children participating in preschool, but most of the early benefits are realized by the public school district.

One of the most important attributes of a functioning PFS system, from investors’ perspectives, is that there is a short timeframe between the original investment and the payoff.  A preschool program should fulfill that requirement, as gains will begin to be realized in the year immediately following preschool, due primarily to reduced special education participation.  In fact, a seven-year time horizon for full repayment of the initial investment amounts to a return of over 10% per year – considerably higher than the realistic expectation for other types of investments.  (Note that the average annual return of the S&P 500 over the past seven years is about 3.4%, and about 7.8% over the past 40 years).

Once we move beyond the time horizon of short and medium-term investors, additional benefits are recouped.  The most significant of these is increased income on the part of participants as they reach adulthood, which not only increases their quality of life but has a ripple effect in society, including creating a more qualified workforce, reducing crime rates, and providing greater tax resources.